Video Game / The Night of the Rabbit 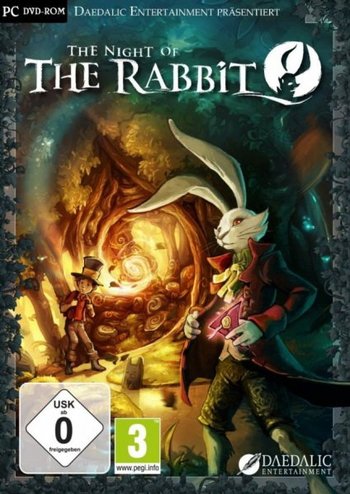 "Nothing is impossible in a day of summer vacation."
—Marquis de Hoto
Advertisement:

The Night of the Rabbit is a 2013 point-and-click Adventure Game developed by Daedalic Entertainment and designed by Matthias Kempke, who is known for the indie game What Makes You Tick: A Stitch in Time

Jeremiah "Jerry" Hazelnut is a 12-year-old boy who dreams of becoming a magician. He is on summer vacation, which is going to end in just two days. Jerry is visited by the mysterious rabbit Marquis de Hoto who invites him to Mousewood, a fairytale-like place populated by colorful sentient animals, where he will be trained to be a magician.

The game starts very innocent and light-hearted, but there are signs that something somber is going on...

Not to be confused with Night of the Lepus.

The Tropes of the Rabbit: