Western Animation / Inside Out 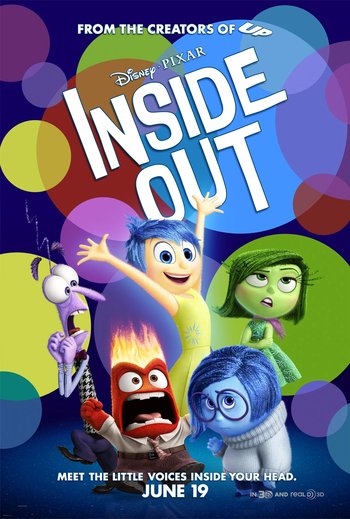 A clever visual metaphor used to personify the abstract concept of thought.note L-R: Fear, Anger, Joy, Sadness, and Disgust.
"Do you ever look at someone and wonder, 'What is going on inside their head?"
— Joy (the very first line of the film)
Advertisement:

Inside Out is an animated film from Pixar Animation Studios. It is directed by Pete Docter (Monsters, Inc., Up) and co-directed by Ronnie del Carmen.

The film focuses on an 11-year-old girl named Riley Andersen, and her emotions, who are personified as people in her head who control her outlook on life. They are:

The problems begin when Riley's family moves from their Minnesota home to San Francisco, and her emotions have to help her deal with her new environment and friends. Joy, who has primarily been in charge of the emotions throughout Riley's life, is determined to keep Riley happy throughout the experience, but Sadness, who has frequently been marginalized by Joy, is trying to find a sense of purpose like the other emotions have. When Sadness accidentally turns several of Riley's previously happy memories of Minnesota into sad ones, the conflict between Joy and Sadness leads to the two accidentally becoming lost within Riley's long term memories, and they must make their way back to Headquarters while Fear, Disgust, and Anger try to keep Riley functioning efficiently in their absence.

The film was released by Disney on June 19, 2015, accompanied by the theatrical short Lava.

A short named Riley's First Date? is included with the home media releases.

See Poison Berry in My Brain and Yumi's Cells for stories with a similar theme in manga and webtoon form.

Inside Out provides examples of: