Go to Your Room! 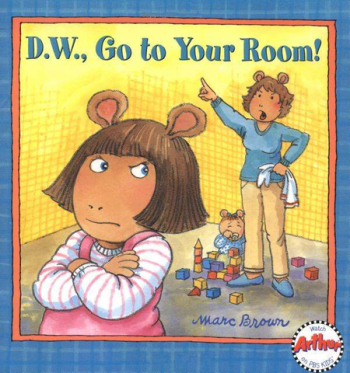 And stop trying to come out every 5 seconds.
Advertisement:

One of the Stock Phrases most often used in a Dom Com when a kid acts up. A milder version of You Are Grounded!. Often followed with "to think about what you've done."

This actually isn't much of a punishment, since many kids' rooms have all their toys and games inside. The trope is often subverted when parents realize this. The punishment probably hails from a time when a child's bedroom didn't have luxuries like computers, TVs, games, consoles or toys, but has been passed down from parent to child for so long it's become standard discipline. Of course, a lot of it depends on the child's personality. This is naturally much more of a punishment for the child who really likes playing outside or with other people, as opposed to one who'd rather just sit and read a book, or make up stories in their imagination anyway.

Truth in Television; lots of people can recall having heard this spoken to them when they were children.