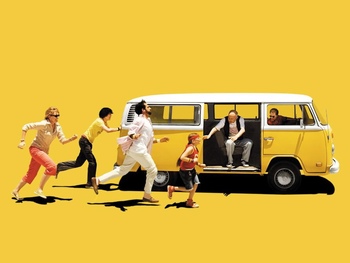 Hmmm. A family and a vehicle. Wonder what genre this could be?
"Everything in life is somewhere else, and you get there in a car."
— E. B. White, One Man's Meat
Advertisement:

A Road-Trip Plot is a work about characters taking a trip to go from point A to point Z, usually in a car. Along the way, they stop by points B, C, D, et al, in diners, motels and Small Towns, while things happen to them at each point. It may be a silly comedy or a drama where characters learn things they didn't know about themselves. Unsurprisingly, this type of plot opens itself wide to Cliche Storms and Narm, but creators conscious of what kind of story they are telling can defy these and create very original and poignant tales, because the characters are removed from their everyday environment.

An important distinction needs to be made between a Road Trip Plot and a Walking the Earth story. If the heroes encounter an adventure at every stop and end up staying at each location for a while to solve some major problem or deal with a big event, it's Walking The Earth, especially if each location can be considered an Adventure Town. If, on the other hand, each location is merely a brief stop along the way, and the story is more about the journey than the specific locations, then it's a Road Trip Plot. The former tend to be episodic, with most of the actual travel happening offscreen between destinations, while the latter is more commonly a structure for a self-contained story.

Not all Road Trip Plots involve use of a vehicle, but it's often what one associates with the genre: a family or group of friends traveling in a car—or a van, or on horseback, maybe even on a boat—from one place to another, with stuff happening at each location. A variant is the outlaws on the run Road Trip, in which the hero (or a couple) are pursued by law enforcement. Road movies can overlap with horror if the heroes are fleeing zombies, serial killer families, and the like.

Films with a Road Trip Plot are called "road movies" and are a distinct cinematic genre. Because of the vastness of the continental United States, its extensive highway network, deep-seated car culture, its love of the "rugged individual" character, and a still-lingering affection for The Western (a genre which road movies draw on a lot), most Road Trip Plots take place there. Characters may discover both wholesome small towns and towns with a seamy underbelly. Historically, the characters are often two male buddies or a couple, but female buddies are also used. The characters are often trying to get away from it all to figure out a personal issue or discover themselves. For this reason, the interaction between the characters is more important than the destination or places they stop.

During Hollywood's Golden Age, Film Noir directors loved road film plots. One of the attractions of the road film was that it was a way around Hays Code censorship rules. A 1940s road movie about an unmarried couple on a road trip would technically follow the rules if the two people stay in separate motel rooms on the trip, but for viewers, knowing that the lovers are alone in the car on the open road and staying in cheap motels got their imagination working.

Live action television programs (As well as other episodic works) often have Road Trip Episodes in which the characters take a trip. Due to the episodic nature of TV—Status Quo Is God—these episodes are typically one-off affairs made to give the characters something new to do and create opportunities for friction.

Road trip episodes can be broken down into several types.

Hard Truckin' is a Sister Trope, as it's a road trip, combined with delivering a 18-wheeler's load to its destination. Compare Blake Snyder's description of this plot, under the title Golden Fleece. Also compare The Quest, along with Booker's version of the archetypes behind it.

Very likely to run into at least one Wacky Wayside Tribe along the way.

Contrast with Going to See the Elephant, where the destination starts the plot. See also Buses Are for Freaks, a trope that may overlap with this if the characters are taking the bus somewhere. See also Wanderlust Song, the Music equivalent of this trope. See also Travelogue Show, the non-fiction equivalent of this. For instances where a road trip is dangerous, see Deadly Road Trip. For road trips that are incredibly short, see Road Trip Across the Street.