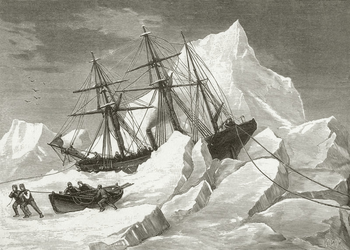 Landfall is the least of their concerns.
In brief: any river voyage (or other journey into the wilderness) is a doomed expedition in which the characters alternately die, go mad, get lost, go native, or otherwise barely live to tell the tale.
Advertisement:

This tends to broadly describe any expedition that involves a hopeless journey along a set path (or path of least resistance) to an unfamiliar (possibly hopeless or nonexistent) destination. Often this involves a boat and a river. This trope explains why Genre Savvy adventurers know to avoid river expeditions at all costs, even though it is usually the fastest way of penetrating the interior.

This trope was popularized in Joseph Conrad's Heart of Darkness. However, this is a more universal feature of wilderness expeditions, and predates Conrad.

River of Insanity more generally describes a doomed voyage "into the wild" (usually focused on the trip itself), since examples show that almost any wilderness voyage in fiction, especially by boat, is doomed from the start, either because of the river itself or the natives or Cabin Fever. The Captain of such an expedition will often be the Determinator, willing to press on regardless of cost, until only he is left. Far from being honored for his perseverance by the reward of a legendary destination, the author himself may mock him for his efforts.

Often there is An Aesop about the supreme power of Mother Nature or, more cynically, the fundamental indifference of Nature to our survival, or merely a metaphor for the triumph of barbarism and the darkness of the human soul. Compare Hungry Jungle.

Contrast Late to the Tragedy (in which the destination is often known because of a Distress Signal). See also Send in the Search Team and Deadly Road Trip, which is the Horror equivalent for vacations. The journey to get there is usually glossed over in that trope. For the exact opposite of this trope, see Walk into Mordor; in which the destination is pre-determined, and there is no set path, such as a river, to follow — only obstacles — such as Climbing the Cliffs of Insanity.

Compare Don't Go in the Woods and Horrible Camping Trip, both of which hold that camping trips in the woods never seem to turn out all that well either (though they turn out worse in the former than the latter...) See also Macho Disaster Expedition and Hungry Jungle. If the destination is merely a MacGuffin, it's Going to See the Elephant.

In this trope, the journey is more psychological than physical, although it can also be both. However, it almost always involves a pre-set route such as a river to an unknown destination.

If their vessel was never seen again, see Ghost Ship. In the worst case, they may become Flying Dutchman, doomed to wander the wilderness forever.