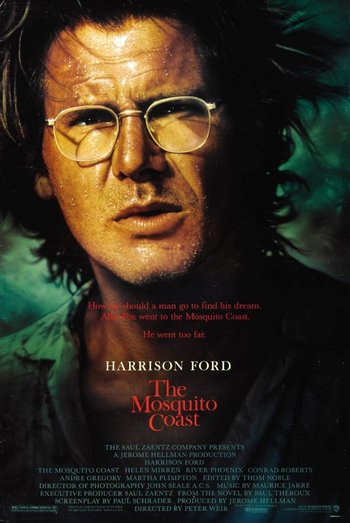 The Mosquito Coast is a 1986 American drama film directed by Peter Weir, based on the eponymous novel by Paul Theroux.

It stars Harrison Ford, Helen Mirren, and River Phoenix in a story of a family that leaves the United States and tries to find a happier and simpler life in the jungles of Nicaragua. However, their jungle paradise quickly turns into a dystopia as their stubborn father's behavior becomes increasingly erratic and aggressive.

The film was a commercial failure at the time, which many believed was due to audiences not being able to accept Ford, whose big claim to fame was playing lovable rogues such as Han Solo and Indiana Jones, in such an unlikable role (Jack Nicholson was reportedly the original choice for the role). Despite this, Ford still cites the film as one of his personal favorites from the work he's done.

Remade in 2021 as an Apple TV+ series, with Justin Theroux (Paul's nephew) in the lead role.

The Mosquito Coast provides examples of: