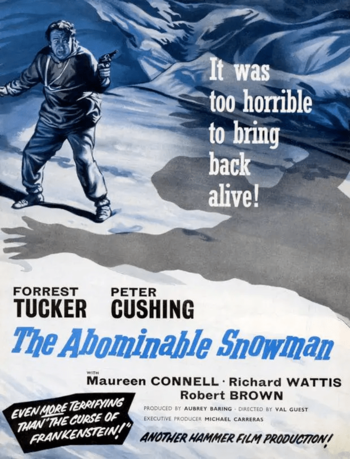 A 1957 Hammer Horror film, released in the U.S. as The Abominable Snowman of the Himalayas. It was directed by Val Guest and written by Nigel Kneale, adapting Kneale's BBC radio drama The Creature that had aired two years earlier. The film is something of a hidden classic among the Hammer canon, as it is less lurid and more cerebral than the films for which the studio is usually remembered. A remake was announced in 2013, but seems to have fizzled out.

Dr. John Rollason (Peter Cushing) is staying at a Buddhist monastery in the Himalayas, ostensibly to study rare plants. However, when an expedition led by boorish American Tom Friend (Forrest Tucker) appears with a plan to search for the elusive yeti, or "abominable snowman," it turns out that Rollason is something of a cryptozoologist on the side. He decides to go on the expedition with just four other men, over the strenuous objections of his wife Helen (Maureen Connell) and the rather quieter resistance of the head lama (Arnold Marle).

Once they're up on the mountain, Rollason is horrified to find out that Friend isn't just interested in studying the yeti, but plans to bring one back to the West to make some greenbacks. It doesn't help that one of his companions, Andrew McNee (Michael Brill) turns out to be a bad climber who bribed his way into the expedition because, after glimpsing a yeti years earlier, he's obsessed with finding one again. And then when the yeti do show up, the signs suggest they might be a lot smarter than anyone thought...

Tropes seen in The Abominable Snowman include: