Video Game / The Flame in the Flood 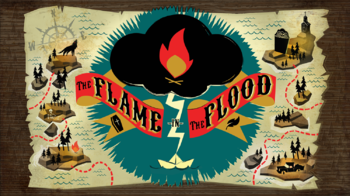 The Flame in the Flood is a third-person survival game by The Molasses Flood. It was initially released for Xbox One and PC in 2016, with PlayStation 4 and Nintendo Switch versions the following year.

In a desolate, post-societal America, you are a lone traveler named Scout. One day, a dog (named Aesop) stumbles upon you, dragging with him a backpack with a radio inside. You decide to adopt the dog and follow the radio's signal in the hopes that you will find other humans.

What separates this game from others of the survival genre is that, not only must you scavenge for supplies and look after a hunger, thirst, and rest meter, but you explore the world by traversing on a long, winding, and unforgiving river on a makeshift raft that you can upgrade. Said supplies are picked up on little islands in the river that you can dock on. You must also avoid crashing your raft into rocks and cliffs, lest you get too wet or drown. In Endless Mode, the goal is to travel as far down the river as you can without dying.

Tropes found in The Flame in The Flood: