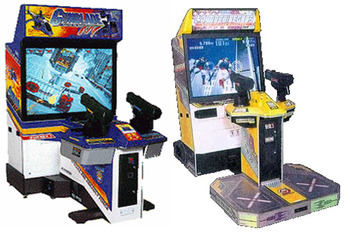 Gunblade NY: Special Air Force Assault is a 1995 Light Gun Game with Rail Shooter elements developed and published by SEGA using the Model 2 hardware for its arcade machines. Set in New York City, terrorists called "BEAR EX", disguised as a shipping company, attack Times Square on July 12 2005 with hopes to overthrow the government. Fortunately, the military rolls out the "Special Air Assault Force" (S.A.A.F.) to take care them using a special helicopter with man-controlled turrets. L.A. Machineguns: Rage of the Machines is the 1998 sequel using the SEGA Model 3 Step 2 hardware, but rather than a helicopter, players use hoverbikes in a futuristic 2025 Los Angeles to quell another terrorist organization as part of the "Special Independent Force Against Terrorism" (S.I.F.A.T.).

Gunblade NY features three modes of play: two campaign scenarios ("Easy" and "Hard") of four difficulty-specific levels and a unique "Score Attack Remix", a Time Trial where players must score as many points as possible using one credit within a total of 300 seconds across 4 stages. L.A. Machineguns opted out in favor of a singular campaign with four levels that are selectable by players to tackle in any order; completing all four "successfully" and within time constraints unlocks the fifth and final stage of the game.

In August 2010, both games were compiled and ported onto the Wii as Gunblade NY & L.A. Machineguns Arcade Hits Pack to take advantage of the console's hand-held motion controllers to mimic the original arcade. While Gunblade NY remains largely unchanged for the port, this version of L.A. Machineguns includes unlockable weapons, different shooting styles (shotgun spread instead of rapid-fire) and extending the "Chain Combo" to allow higher scores than the original arcade version. Both games also feature leaderboards that are, unfortunately, defunct due to the service discontinuation of the Nintendo Wi-Fi Connection in May 2014.

Tropes for both games include: