All spoilers here are unmarked. You Have Been Warned! 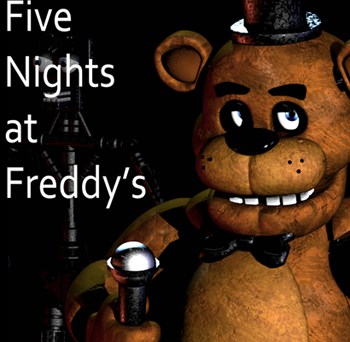 Are you ready for Freddy?
"Family pizzeria looking for security guard to work the nightshift. 12 am to 6 am. Monitor cameras, ensure safety of equipment and animatronic characters. Not responsible for injury/dismemberment."
— Newspaper ad for Freddy Fazbear's Pizza
Advertisement:

Congratulations, you have a new job as the night watchman at Freddy Fazbear's Pizza! It couldn't be simpler: you spend the night watching the security cameras for any sign of trouble... not that you would have to expect any trouble at such a quiet, innocent place.

... well, if we're being completely honest, we know you've probably heard rumours that the animatronic characters tend to... wander a bit at night. And if they spot you, they'll stuff your fleshy body into an empty costume filled with needlessly sharp metal components. But even if those were true, you don't need to worry, because you can just close the doors to your office.

... okay, if you want full disclosure, closing the doors will use up part of the small amount of generator power you're allotted each night. Yeah, the company doesn't like to waste money on things like needless amounts of electricity, especially for a night shift. Checking the cameras and turning on the lights to check your blind spots will also use up power. But really, what's the worst that could happen if the power goes out? You just sit in the dark for a while with two very open doors — no big deal. And no, the pizzeria has nothing to do with the five children that disappeared on June 26th.

You really don't have anything to worry about. You acknowledged as much when you signed your legally-binding employment contract. It's just five nights.

What could possibly go wrong?

(released on August 8th, 2014) is a horror-themed strategy game by Scott Cawthon and the first in the eponymous franchise. It's based around resource management: you have a nonrenewable source of electricity that drains every time you use the cameras, shut the doors, or turn on the lights. If an animatronic enters the office, it will kill you instantly. If you make it to 6 AM, you live to work another night shift.

Each animatronic (Bonnie, Chica, Foxy, and the titular Freddy) has a different pattern and triggers, which makes learning those patterns and triggers a must if you want to win. The real horror from the game comes not from the jump scares that happen when you lose (and sometimes even when you win), but from the frantic horror of trying to keep an eye on your potential killers while handling your electricity in the most efficient way possible.

You can purchase the game on Desura

, and the iTunes App Store

In August of 2020, as part of the "Fazbear Fanverse Initiative", an semi-official (but non-canon) remake/reimagining of the game was officially confirmed by Scott Cawthon, to be made by fangame creator Phisnom (who previously made Five Nights at Freddy's 2 Open Source and Porkchop's Adventure). Later that month, the remake's title was officially confirmed as Five Nights at Freddy's Plus.

Should the player survive the night at Freddy Fazbear's Pizza up until 6 AM, the Westminster Chimes would immediately play to signal the end of their terrifying shift.

Should the player survive the night at Freddy Fazbear's Pizza up until 6 AM, the Westminster Chimes would immediately play to signal the end of their terrifying shift.