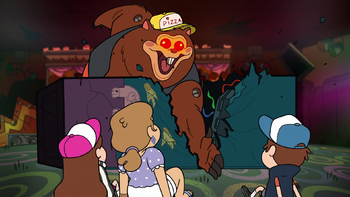 Let's Eat Kids!
"Now concerning your safety, the only real risk to you as a night watchman here, if any, is the fact that these characters, uh, if they happen to see you after hours probably won't recognize you as a person. They'll p-most likely see you as a metal endoskeleton without its costume on. Now since that's against the rules here at Freddy Fazbear's Pizza, they'll probably try to... forcefully stuff you inside a Freddy Fazbear suit."
— Phone Guy, about the Animatronics, Five Nights at Freddy's
Advertisement:

Ah, animatronics, a staple at any "child friendly pizza house" or amusement park. Too bad they're terrifying. And sometimes, they'll come to life and try to kill you.

Now, the animatronics don't have to actually kill anyone, or even, strictly, be trying to. They just have to attack.

Subtrope of Killer Robot. Compare Creepy Mascot Suit, which often goes hand-in-hand with this trope because they both resemble anthropomorphic animals, and Monster Clown, another trope about a source of light-hearted entertainment being evil. May be combined with Robot Clown.