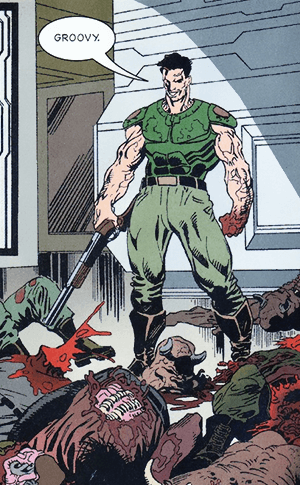 "I got 57 more goddamn rounds in this four round magazine."
Over the centuries, mankind has tried many ways of combating the forces of evil... prayer, fasting, good works and so on. Up until Doom, no one seemed to have thought about the double-barrel shotgun. Eat leaden death, demon...
— Terry Pratchett, alt.fan.pratchett
Advertisement:

In Video Games, and indeed in fiction as well, no matter how many super-powerful weapons the player or protagonist has at their disposal, many will always tend to use their shotgun.

There are several different reasons for this, though not all of them are always the case:

However, perhaps the simplest explanation of this trope is that shotguns are just badass, especially when shortened.

Real Life shotguns, despite having a short effective range note (which may not be so short and comparable to some rifles if a modern slug is fired), can be tremendously destructive if loaded with large buckshot and modern

◊ developed for hunting large and dangerous game. In the case of slugs, some can be fired with considerable accuracy up to almost one hundred yards. However, they are nowhere near as powerful as they are often depicted in fiction; higher momentum and mass usually results in larger wounds and a twelve gauge slug has similar kinetic energy to a 7.62x51mm NATO round (and about twice as much as a 5.56x45mm NATO round), but also a lower rate of fire and considerable recoil depending on various factors in comparison to most rifles. Furthermore, it’s notable that shotshells are notoriously ineffective for penetrating body armornote Though whether or not said body armor can disperse the raw energy unleashed by the payload is another matter altogether; concussive damage-related injuries aren’t unheard of even if the body armor stopped the initial spread. Because of these factors, shotguns see little use in a military role outside of breaching doors.

A shotgun is often the Weapon of Choice for farmers, mountain men, hillbillies in general, other rural folks and your average day civilians, due to traditionally being affordable; ammo being cheap as well as plentiful; and typically having less restrictions for owning one. Hardened criminals and dutiful police alike favour the shotgun's killing power in close quarters and sheer intimidation value, plus the Zombie Apocalypse Hero also usually finds the shotgun particularly useful for re-deading the undead. In an action movie, the shotgun tends to find itself in the hands of the Anti-Hero or The Dragon, practically never The Hero — though some exceptions do exist.

How much of a Short-Range Shotgun it is within a video game may affect the gun's overall usefulness, thus it may disqualify it. This Is My Boomstick will apply if the wielder of the shotgun happens upon a group of natives who have never even seen a shotgun before and attempts to impress them by describing it in detail. See also One-Handed Shotgun Pump. If the barrel is intentionally shortened it may be a Sawed-Off Shotgun. Calling Shotgun does not necessarily mean the person actually has a shotgun, although it can help...