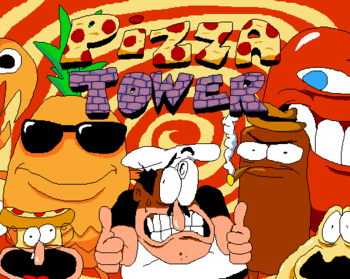 Pizza Tower is a platformer currently in development made by the mysterious "Pizza Tower Guy", inspired by Wario Land and Earthworm Jim.

You play as Peppino Spaghetti, the owner of a failing pizza restaurant, on his quest to find many secret ingredients to hopefully save his restaurant. On his journey, he is opposed by the Noise, a man-child who messes with Peppino just because he wants to. Unbeknownst to each other, they are actually helping one another in their quests for the secret ingredients.

In the game, you play as Peppino or The Noise (both in co-op mode), going from tower to tower, looking for ingredients. Within the towers live many cheesy enemies attempting to protect the ingredients. After fighting through their defenses (and maybe saving a few toppins on the way), when they collect the ingredient, the tower starts to collapse (Be it the Noise setting a bomb, or the tower collapsing on its own) and they have to escape.

Pizza Tower also had a spinoff in development, Pizza Crawler, which was a dungeon crawler starring "Gustavo", whose relation to Peppino and general story is unknown. Crawler has been cancelled, but Gustavo is still featured as a non-playable character in the Gnome Forest level.