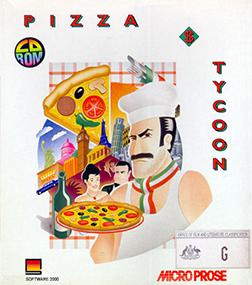 Pizza Tycoon (called Pizza Connection in Europe), is a 1994 business simulation game published by MicroProse. It has the player manage a pizza company in a city in Europe and/or the United States. After picking out a city, the player can buy or rent a store, staff it, furnish it, and design their own pizzas to serve. Players will have to deal with staff issues, customer complaints, as well as paying the bills.
Advertisement:

It also gives the player the option to get involved with the criminal underworld, doing activities such as drug dealing, weapon dealing, or sabotaging competitors. While the player can avoid the Mafia, the competitors will not, and is advisable to do so to keep one's storefront safe from attacks.

Can be run on modern day computers with help from DOSBox.