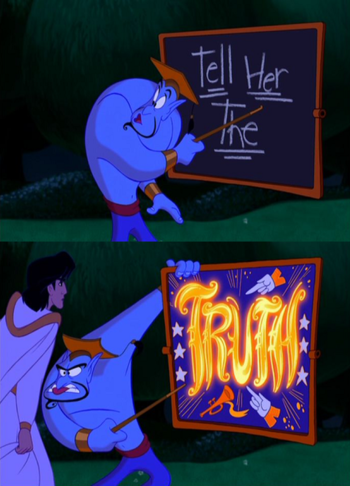 Genie drives the point home to Aladdin.
"I want an iron-clad lifetime contract, along with a full wipe-the-fucking-record-clean pardon for any and all prior acts. I know you don't trust me. The beauty is that you don't have to. Nothing I can possibly do will make shit worse than it is already."
— Caine (making his closing argument after The Reveal at the end), Caine Black Knife
Advertisement:

Your dad corners you about your having chopped down a cherry tree, a key step in your Evil Plan.

What do you do?

You tell him everything. You have the feeling that honesty will not derail your plan.

Differs from a Sarcastic Confession in that a Sarcastic Confession is when someone says the truth in a sarcastic tone, as if to make you think he is lying. This is when you tell them the truth with a straight face, and yet you are confident that it will not set you back. Differs from Just Between You and Me in that it is an intentional revelation that hinges on the person being unable (or unwilling) to do anything about it, rather than triumphant gloating to an endangered hero. The finest examples of this trope have things set up in advance so that the person to whom you've confessed will actually advance your plans if he acts on the information you just gave him.

Not related to Honesty Aesop. See Honest Axe and Secret Test of Character for when the character really is just being honest and not Genre Savvy. See also Sarcastic Confession, Just Between You and Me, Cassandra Truth.