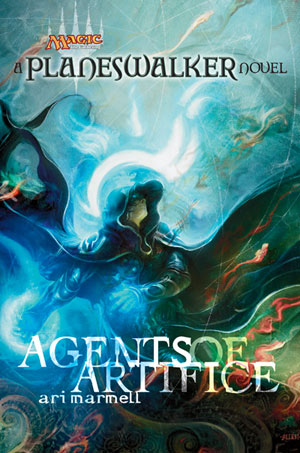 Agents of Artifice is a Magic: The Gathering novel by Ari Marmell. It's the first of the Planeswalker novel series, and it focuses primarily on the blue-aligned planeswalker Jace Beleren

, although Liliana Vess, Tezzeret, and Nicol Bolas have central roles as well.

Jace Beleren, a powerful telepathic planeswalker, is the star of this show, and everyone seems to be interested in his abilities. Tezzeret, a powerful artificer, planeswalker, and power-hungry head of an interplanar mercantile organization called the Infinite Consortium, wants to recruit him. Liliana Vess, a necromancer and another fellow planeswalker, wants him as a friend and ally—or at least, that's what she says. And there are quite a lot of other people who'd simply like to see him dead. Agents of Artifice follows the young Beleren as he grows in strength, gains and loses friends and enemies, and struggles to keep from being corrupted by the temptations of power.

Test of Metal is a direct sequel.

Agents of Artifice provides examples of the following tropes: