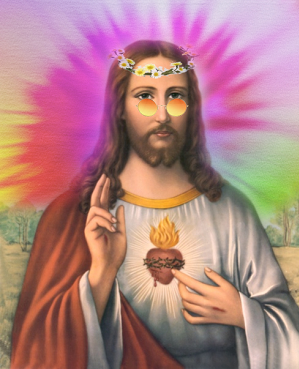 Jesus' typical outfit (the long hair, beard, sandals one. Not the sword in mouth, albino Revelations one that may or may not be himnote Some Christian faiths hold that this guy in Revelation 1:12-20 is Jesus' assistant or messenger, maybe like John the Baptist, but is not Jesus himself.) and message (at least, parts of it - spread love and peace, leave behind your old life) nowadays makes one think of a hippie. Of course, the connection came the other way round - the hippies followed their model of Jesus.

So nowadays you often see Jesus depicted like this. Not just looking the way, but also acting much like it. Because, even in eras when short haircuts, shaven faces, and fancy suits were the norm, the character was always portrayed "looking like a hippie."