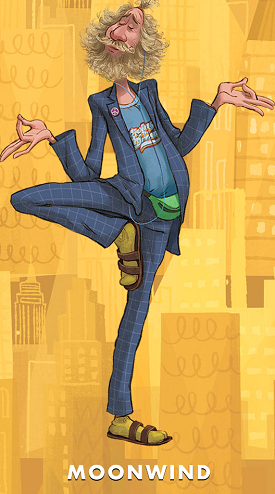 Michael: What's your name?
Star: Star.
Michael: Oh, your folks too, huh?
Star: What do you mean?
Michael: Ex-hippies. I came this close to being called Moonbeam or Moonchild, or something like that.
— The Lost Boys
Advertisement:

The stock type of name for a New-Age Retro Hippie or their offspring, the Granola Girl, Commune residents, or other folks that are inclined to be on the Hippie Index, dude.

Fictional Hippie Names are commonly composed of words that evoke:

While these are the stereotypical ways Hippie Names show up in fiction, other names that are otherwise considered unusual, odd, or "groovy" apply as long as the weirdness is attributed to the namers being free-spirited bohemians.

In most cases, children with Hippie Parents bestowed with a Hippie Name find it embarrassing or otherwise unfortunate and may opt to change it to something more "sensible" after one too many Who Names Their Kid "Dude"? reactions from outsiders. Alternatively, someone who decides to become a hippie may rename themselves with a hippie name as an indicator of their new lifestyle.

In real life, hippies may or may not carry such names; many who embraced the lifestyle have rather mundane names.

Likely to be the "Aerith" in an Aerith and Bob situation. There may be some overlap with Floral Theme Naming, Rock Theme Naming, Luke Nounverber, and Darkness Von Gothick Name. Contrast Preppy Name, Ghetto Name, and Hayseed Name, which speak to the character's socioeconomic status and background.