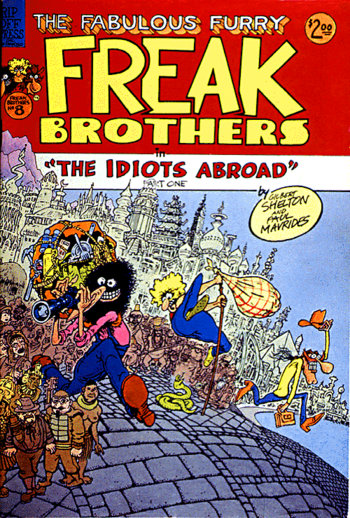 Ignore the name, and it's a great example!
Advertisement:

Underground comics (or "comix") are small press or self-published comic books that first emerged in the 1960's. They came about as an artistic response to the mainstream, Comics Code Authority approved comics, which focused on superheroes, war, romance, and juvenile humor, while ignoring many of the real-life issues affecting their readers. Underground comics took on these topics forbidden in the mainstream, including explicit drug use, sexuality and violence. They were most popular from the late 1960's to the early 1980's.

Underground comics were popular with the hippie counterculture and punk scenes. Produced by people like Robert Crumb, Gilbert Shelton, and Gary Panter, the comics tapped into the zeitgeist of the youth culture, exploring themes of distrust in government, the horrors of daily life, and the fading of The American Dream.

Underground comics gained prominence and influence, as is evidenced in such works as The Movie of Fritz the Cat, Down and Dirty Duck and Monty Python's Flying Circus. Also, Zippy the Pinhead and Teenage Mutant Ninja Turtles originally began as underground comics before gaining mainstream success (in Zippy's case, syndication in newspapers, whereas the Turtles were basically commercialized and pimped out by major corporations). Even mainstream comic books weren't immune, and took on underground themes, as with Howard the Duck. Their legacy is most obvious with Alternative Comics, the genre's Spiritual Successor.

This movement helped to kick off the Furry Fandom early on due to the sheer number of attempts to subvert the belief that "all comics are Funny Animals" that was pervading the mainstream comics industry in the 70s, by basically taking those characters and putting them in adult or sexual situations.

Still other underground comics were important not for the sex and violence, but because they could be experimental in other ways; exploring subject matter that was mundane rather than fantastic, or experimenting with the medium of comics itself.

As the comic industry has matured (or at least become more tolerant), these pioneering works have lost some of their original power; Slice of Life, extreme violence, and sex have all found their way into mainstream comics nowadays, but that doesn't mean these comics are any less important or entertaining.

The Underground Comix influence waned during The '80s due to a number of reasons. The counterculture of The '60s had fallen out of relevance. These comic books had very limited printing and distribution. They were often found only in head shops (stores that specialized in cannabis paraphenelia). The rise of Indy Comics (or Independent Publishers; meaning almost everyone who was not Marvel or DC) opened the door for comic books published in a diverse range of genres that were not necessarily edgy, pornographic, taboo, or subversive, but simply providing alternatives to the superhero genre.