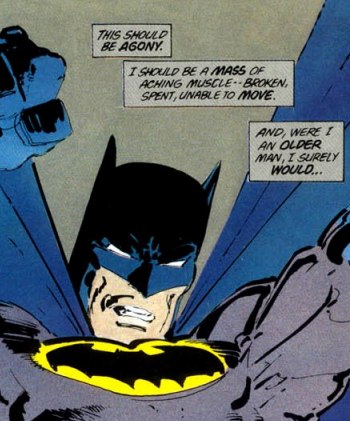 Captions have been used in the comics medium to convey narration, description, and setting. It has become a recent trend in Western comics, starting from approximately the Dark Age, to represent characters' thoughts with captions as opposed to thought bubbles, a comic-book equivalent of the cinematic technique of first-person narrative voice-over.

"[Thought] captions seem to acknowledge the audience in a way that [thought] balloons don't, as if the character was sending their thoughts directly to the reader, and they can give the text an extra level of intimacy. They also don't require the thinker to be in panel to show where the thought originates from, so they can appear in panels that are framed from the thinker's point of view. Such 'thought captions' are usually in present tense ... and first person ... but past tense narration ... can cover a lot of the same ground." (155).
Advertisement:

Note that in manga, this is essentially the norm, as characters' thoughts are generally not shown in thought bubbles though they are not necessarily in captions and can be simply written on the page detached from the characters.

When captions are used to represent the thoughts of different characters, it becomes an issue to indicate to which character the thoughts belong. Measures often taken to do so usually involve using different fonts, different caption colors, or even different font colors that generally match the costume or personality of whoever is using them.