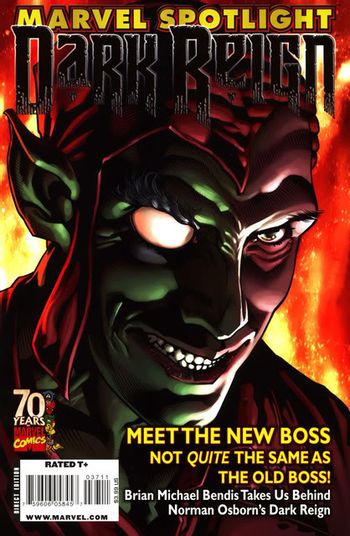 Norman Osborn: A man you can trust.
"This is my country."
— Norman Osborn, Thunderbolts #124
Advertisement:

Marvel Comics' non-Crossover (read: a verse-wide storyline described by Joe Quesada as "it's not a crossover, just what's happening in the Marvel Universe") which follows the aftermath of Secret Invasion. It's a Crisis Crossover-sized event, but is not a crossover in the common meaning of the word - comics were not tied to a strict plot, but were showing multiple heroes dealing with a Villain with Good Publicity becoming one of the most powerful men in the United States.

After Secret Invasion, the general public blames Iron Man, then director of S.H.I.E.L.D., for not preventing the Alien Invasion. Meanwhile, Spider-Man's Arch Enemy Norman Osborn, leader of the Thunderbolts, gains himself some huge points in the battle of public opinion, as news networks featured him being a leader in the fight against the Skrulls, and eventually ending the entire conflict by blowing the head off the Skrull queen before any of the assembled heroes could kill her. This televised act of heroism (which may have been staged, depending on whether you believe Deadpool or not) led The President to dismiss Stark and replace him with Osborn. Norman, very happy with how things went, quickly replaced S.H.I.E.L.D. with his own organization, H.A.M.M.E.R., and formed the Cabal - an alliance between him, Emma Frost, Namor, Loki, The Hood, and Doctor Doom. He also creates his own, twisted version of the The Avengers - Dark Avengers, with most of the team members being supervillains in heroes' costumes led by Osborn himself in an Iron Man armor with a Red, White and Blue paint job, under the name of "Iron Patriot". At the same time, he sets up a plan to replace and kill half of his former Thunderbolts teammates, as they might have information that would make him look less appealing to the public at large (the other half joined the Dark Avengers). His allies from The Cabal are plotting against him, many heroes and a few villains want to get rid of him, but Osborn doesn't seem to care — he has a mysterious ally, somebody who can instill fear even in his fellow members of The Cabal.

Dark Reign spawned several tie-ins, but some plot points are also being resolved in titles not officially marked as such. Due to this, fans still consider everything which deals with Norman or any other member of Cabal as a part of the event.

Dark Reign started right after Secret Invasion and lasted a year before the Grand Finale four-part event Siege. It's followed by Heroic Age.

Has nothing to do with the Dark Reign game series.