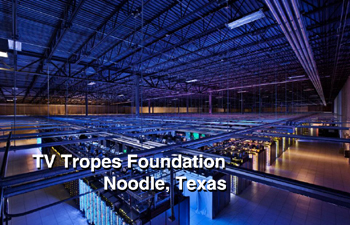 In case you confused it for the TV Tropes Foundation in Noodle, New York. *ding*
Advertisement:

A direction in the script to lay words on the screen. This could be a dateline such as "Amsterdam, 2026", or "Three Days Ago". Primarily used to fix the setting firmly in the minds of the audience. An Epistolary Novel or diary will often provide the place and time for which the character wrote the entry.

For visual mediums, it comes in two major flavors: words on a solid background, usually black (a milder and less Anvilicious take on the Opening Scroll), or text shown at the bottom of the screen as the camera shows an Establishing Shot of the location. The latter can appear on the screen all at once or one letter at a time, as if typed with a typewriter (bonus points for a fixed-width font).

This is very common in shows taking place 20 Minutes into the Future or Exactly Exty Years Ago (in either direction) and Thrillers of any kind, particularly, Spy Fiction. May exhibit the "London, England" Syndrome.

Also known as Scene Shift Caption. The closest term the industry has for it seems to be chyron