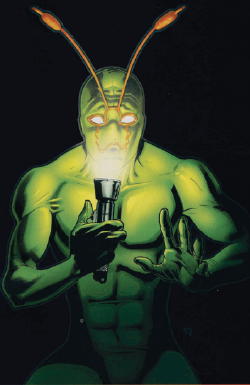 I'm watching you while you surf TV Tropes...

A character from The DCU, created by comic book writer/artist Keith Giffen, Ambush Bug is the Cloudcuckoolander secret identity of Irwin Schwab, a man raised solely on TV who one day discovered a green teleportation suit that was sent within a capsule from a doomed planet (or so he claims.) He has starred in several critically acclaimed mini-series, though he is pretty much on the fringe of the comic universe he inhabits.

Ambush Bug first appeared in DC Comics Presents #52 (December, 1982). Originally he appeared as a minor foe of Superman, before deciding to become a superhero himself, though Ambush Bug proves himself utterly incompetent at the job. As time went on, his appearances became increasingly in-jokey, Fourth Wall breaking, satirical and surreal. As a generally Fun Personified character, he wasn't seen much during the pits of The Dark Age of Comic Books, and though he is rarely used by other writers, he still exists in the DC Universe. He became a supporting character in Keith Giffen's Doom Patrol.

In the New 52, he's a roving reporter for Channel 52 News, a method of combining information about what's happening in the DCU with a comedy backup strip.

His final appearance, unless Keith Giffen is asked to write for him again, is in the Convergence tie-in based on Supergirl: Matrix.

The closest Marvel Comics equivalent would likely be Deadpool,note Mixed with Lobo with a dash of Squirrel Girl thrown in (though Ambush appeared before either of them) and a bit of Forbush Mannote a similar Super Zero from Marvel's own parody book Not Brand Ecch (who actually predated Bug) as well.

This character provides examples of the following Tropes: