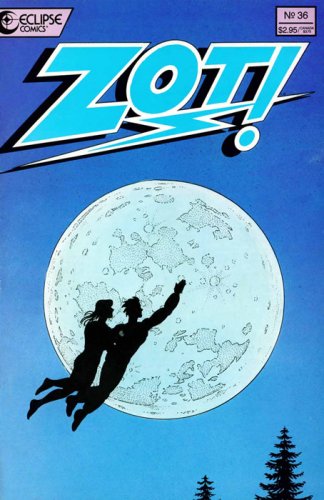 Zot! is about Zachary T. Paleozogt or "Zot," a superhero from the far-flung future of 1965. He goes about fighting villains and righting wrongs, stopping crimes, and generally being a decent human being.

It's also about Jenny Weaver, a thirteen-year-old girl whose parents are on the cusp of divorce, whose brother is generally nice when he's not drunk, and who has a philosophy that the Earth is "wrong" and filled with "broken people."

The comic is a study in the Sliding Scale of Idealism Versus Cynicism, a love story, and a Slice of Life story about a group of teenagers trying to make their way in the world. It just so happens that one teenager comes from a very different world.

in 2000), Zot! was a mainstream comic that played around with superhero tropes and generally brought to the mainstream what had previously only been seen in manga or underground comics. There is now a giant, 500+ page omnibus edition with all the issues of the 1987-1991 black & white run in it.