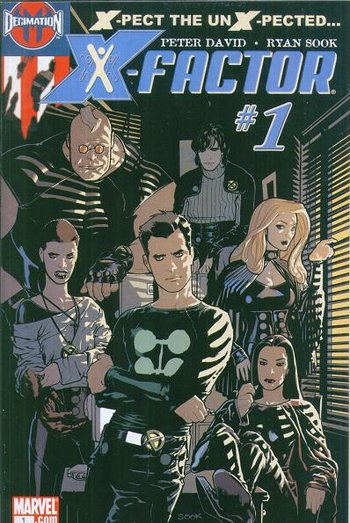 The third volume of X-Factor by Peter David. It revolves around X-Factor Investigations, a detective agency run by Jamie Madrox, formerly known as Multiple Man, which was founded in his own miniseries Madrox. The name is taken from the government-sponsored group the three founders previously served in. The initial staff consists of Madrox's best friend and special enforcer, Guido Carosella (Strong Guy), and former teammate Rahne Sinclair (Wolfsbane).

Following the events of the House of M storyline, Madrox's new-found wealth from winning a Who Wants to Be a Millionaire?-style game show allows him to recruit several of his former colleagues from the Paris branch of the now-defunct X-Corporation. New members include M (Monet St. Croix), a powerless Rictor, Theresa Cassidy (Siryn), and Layla Miller (Butterfly). Later on other members would also join, such as Armando Munoz (Darwin), Longshot, Gaveedra-7 (Shatterstar) and Pip the Troll. Lorna Dane (Polaris) and Alex Summers (Havok) also join the team in the final arcs.

After 50 issues, the title reverted to X-Factor Volume 1 and was renumbered starting with #200. The series ended with issue #262 in September 2013.