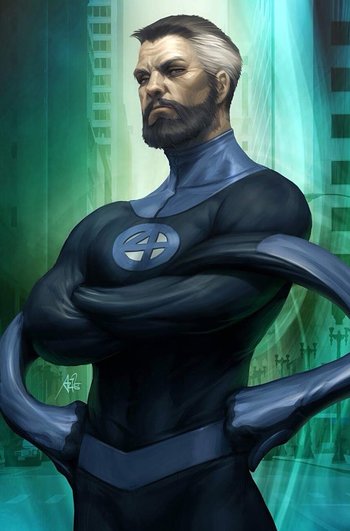 Dubbed one of the smartest people in the Marvel Universe, Reed was a mild-mannered scientist who —alongside his girlfriend Sue Storm, best friend Benjamin Grimm, and Sue's younger brother Johnny— gained fantastic powers and abilities together while on a mission in outer space. In a classic example of superhero irony, the accident turned obstinate, rigid Reed into a Rubber Man with super-flexibility.

While far from a joke character in the truest sense, Reed has a reputation of being somewhat ineffectual, and is the trope namer of Reed Richards Is Useless. By contrast, he's also the namer of Alternate Universe Reed Richards Is Awesome, which is references the popular opinion that alternate universe versions of himself (such as the villainous Maker of Ultimate Marvel) are superior to the original.

As one of the first true Marvel characters, Reed has appeared quite often in other media. He most notably appeared in every Fantastic Four film, portrayed by Alex Hyde-White, Ioan Gruffudd, and Miles Teller in each, respectively.

After Reed reveals how he tricked Magneto into thinking he lost his powers, Magneto is so shocked he doesn't even remember he didn't actually lose his powers.

Example of:
Forgot About His Powers

After Reed reveals how he tricked Magneto into thinking he lost his powers, Magneto is so shocked he doesn't even remember he didn't actually lose his powers.