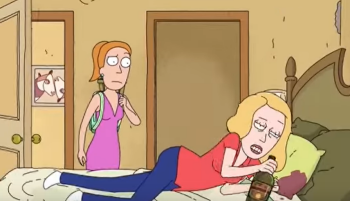 "Don't you know you've got your daddy's eyes? Daddy was an alcoholic."
— Alcoholic, Starsailor
Advertisement:

Unfortunately also Truth in Television. Compare the Addled Addict, who may or may not have children, and Junkie Parent.

Jo shouts at a drunk dad.

Jo shouts at a drunk dad.