Film / The Boy Who Could Fly 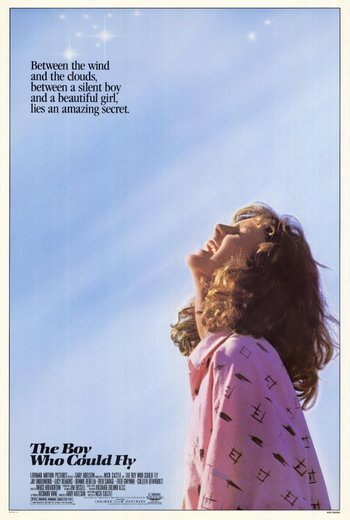 Love is never where you think you'll find it. All you need is the very first kiss and you're walking on air.
"Between a silent boy and a beautiful girl lies an amazing secret."
— Tagline
Advertisement:

The Boy Who Could Fly is a 1986 film directed and written by Nick Castle.

Amelia "Milly" Michaelson (Lucy Deakins) and her family have had a tough year. Her father has passed away, causing them to move to a new neighborhood. Milly and her brother Louis (Fred Savage) have a rough time adjusting to their new schools and their mom Charlene's (Bonnie Bedelia) return to the workforce has her working with a computer that she can't figure out.

Milly soon meets her neighbor Eric Gibb (Jay Underwood), an autistic young boy living with an alcoholic uncle named Hugo (Fred Gwynne). He never socializes with others, hasn't spoken at all, and sometimes raises his arms in the air to pretend to be an airplane, since his parents died in a plane crash. As soon as the two meet, Eric and Milly warm up to each other and become fast friends. However, with Hugo's alcoholism and Eric's strange behavior, Eric could be taken away to a hospital at any moment. Furthermore, a couple of strange incidents makes Milly start to believe that Eric might really have the ability to fly...