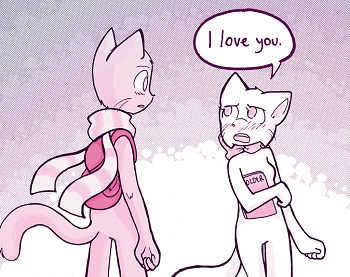 This is when one character makes a declaration of love to another. How it's done, and the reactions to it, will vary. It usually happens with a sense of drama, particularly with shy characters, who are mortified at the thought that they could be rejected by the object of their affection. It carries extra weight if the confessor has been a longtime admirer or has been carrying a secret crush. It's generally seen as a big risk with a guy confessing to a girl, but when a girl confesses to a guy it is seen as a triumphant moment. With all significant declarations there is The "I Love You" Stigma that follows, it's meant to be a big moment. Crush Blush may occur for either person, or both.

Unresolved Sexual Tension is often at the core of the confession, especially if the two parties are known for being Vitriolic Best Buds or Like Brother and Sister. The reaction may either be to accept the confessor's affection and reciprocate, or acknowledge the affection but turn it down. If the person is a Jerkass, expect it to be done in such a way for maximum humiliation.

In those harsh cases the end result is Did Not Get the Girl; yet the person being confessed to may say that they're Better as Friends or I Don't Want to Ruin Our Friendship, in order to spare the confessor's feelings. If the two parties have known each other since childhood and the confession is accepted and the love reciprocated, what you have is First Girl Wins and Victorious Childhood Friend.

Be careful, though—if the confession is refused (whether kindly or brutally) and the confessor is a bit unhinged, it may lead to an "If I Can't Have You……" situation.

As many of the examples listed below attest, a love confession does not require the actual utterance of the phrase "I love you," nor even the word "love".

As Mr. Brittas prepares to leave his job at Whitbury New Town Leisure Centre, Laura tells him how much she's always loved him... or does she?

As Mr. Brittas prepares to leave his job at Whitbury New Town Leisure Centre, Laura tells him how much she's always loved him... or does she?