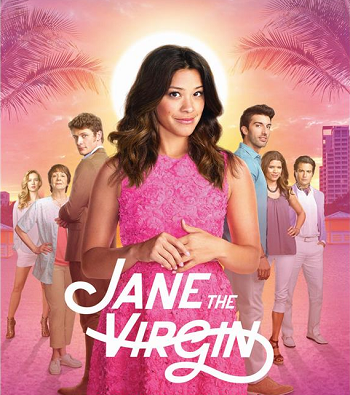 From left to right: Petra, Alba, Michael, Jane, Rafael, Xiomara, Rogelio
"Alas, it was too late. Jane's life was now the stuff of telenovelas."
— Narrator
Advertisement:

Jane the Virgin is a 2014 CW satirical dramedy, and an Americanization of the popular (and frequently adapted) Venezuelan telenovela Juana la virgen. It ran for 100 episodes over five seasons, with its final episode airing in 2019.

Jane Gloriana Villanueva is a 23-year-old hotel worker studying to become a teacher. Although she's been dating Fair Cop Michael Cordero for the last two years, she has sworn to God and her grandmother Alba that she would save herself for marriage, much to the chagrin of her Glamorous Single Mother Xiomara. When not doting on her boyfriend, she spends time with her family, eating grilled cheese and watching telenovelas with her mother and grandmother.

Then one day, when she goes in for a routine pap smear, a distracted doctor accidentally artificially inseminates Jane. Oops.

Now, the sperm belonged to Tall, Dark, and Handsome Rafael Solano, the new owner of the hotel at which Jane works, and with whom Jane shared a dizzying kiss five years earlier. It also turns out that because of chemotherapy Rafael underwent to fight cancer, he can no longer biologically father any children, putting pressure on Jane to keep the child. Also, the sample was meant for his wife, Gold Digger Petra, who had intended to use it to get pregnant so she can meet the duration clause of her pre-nuptials to make serious bank (5 years = 10 million dollars), though there's more to her than meets the eye.

Additionally, the doctor that made this mistake is Rafael's sister Luisa, and this event sets Luisa on the path to reconciling with her ex, Rose, in her quest for legal aid. And Michael begins to dig into a criminal conspiracy centered around Sin Rostro, "the man without a face," a drug dealer who apparently operates out of Rafael's hotel, instantly implicating Rafael, Luisa, their father Emilio and his third wife Rose — yes, the same ex Rose that Luisa just hooked up with.

Oh, and Jane's Disappeared Dad Rogelio, now the star of a popular telenovela, is back in town and wants to reconnect, both with her and with her mother.

Did we mention that's all in the first episode? In the second, things start to get really complicated.

The series is entrenched in a number of Soap Opera and telenovela tropes. However, it's also an Affectionate Parody and Decon-Recon Switch of said tropes, leading to a lot of subversions and twists. It also features an external Narrator (credited as "Latin Lover Narrator") who is practically a character in his own right. He provides infodumps, commentary, recaps, segues between flashbacks and the modern day, and occasional Lampshade Hangings or Deadpan Snarkery. Chyrons

and captions help him keep the plot moving smoothly.

The show's primary focus, despite the drama (and occasional melodrama) of the plot, is the relationship between all the characters, particularly between the three generations of the Villanueva family and the new blended family Jane is attempting to create between herself, Rafael, and their newly-conceived baby (eventually revealed to be a son named Mateo). This is complicated by an ever-shifting love square with two separate Betty and Veronica dynamics, starring Jane, Rafael, Michael, and Petra.

On January 11, 2015, leading actress Gina Rodriguez won her first Golden Globe for the role of Jane.