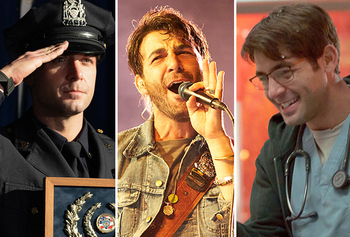 A story where the narrative splits to cover several separate timelines, usually determined by a single (often insignificant) event near the beginning. (Usually, there are only two, but some works depict more.) This is nearly always done by alternating between each of the timelines, though split-screen may be used for certain segments.

Oftentimes, there will be parallels between the variants; however, the main appeal is seeing how the event causes radical changes in the plot. This can be done for either dramatic or comedic purposes, with the latter generally using more ridiculous diverging points and/or subsequent changes.

This may be referred to as a "Sliding Doors plot", after the movie of the same name, which used this trope as its main premise. In episodic media, the title of the episode or story may allude to Sliding Doors in some way.

Sub-trope of Alternate Timeline, Alternate Universe and Flash Sideways. Compare "Rashomon"-Style (which depicts different perspectives on the same events), What If? (which examines an alternate timeline in a manner that doesn't necessarily overtake the main plot), Missed the Bus (which may examine the consequences of a character missing their bus in a similar fashion), or Two Lines, No Waiting (if it only uses two timelines). Contrast "Groundhog Day" Loop (where time keeps repeating regardless of one's actions).