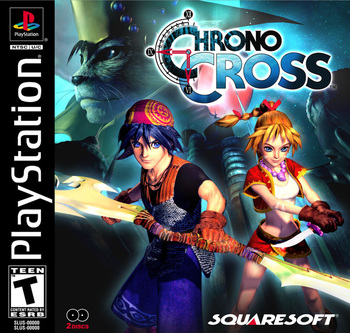 "Show your face, Lynx! Yer 9 lives are up!"
"What was the start of all this? When did the cogs of fate begin to turn? Perhaps it is impossible to grasp that answer now, from deep within the flow of time..."
— Opening Monologue
Advertisement:

Chrono Cross, a Role-Playing Game developed by Square for the PlayStation, is the sequel to Chrono Trigger. More specifically, it is a remake, or re-imagining, or sequel (sort of — it's confusing) to Radical Dreamers, a Visual Novel based on the Chrono 'verse, handled by Masato Kato, the only returning creative lead from Chrono Trigger.

The story revolves around Serge, a village boy who accidentally blunders into an Alternate Universe while trying to get a gift for his sweetheart. This other world is mostly similar to his own, but has a number of very important differences. For starters, in the other world, he's dead. This scenario leads to Serge trying to learn why he's so important to both timelines, getting dragged along on an adventure by a certain pugnacious Aussie girl, mastering the art of dimension-hopping between his Home World and Another World, and, just maybe, saving all of space and time.

There's much more, including a scythe-wielding cat-man with a personal interest in Serge, an ambiguously aligned harlequin, dragon knights, pirates, a Mexican wrestler, cyborgs, musicians who fight with The Power of Rock, dragons, robots, a masked magician, dinosaurs, an undead clown, aliens, a living turnip, and a grand total of 45 playable characters. There isn't room on the page for the charts and diagrams necessary to explain all the tangled plots and overlapping schemes going on.

Much of the team that made this game (aside from Kato) would leave Square after this title and form Monolith Soft. There were rumors of a sequel when Square registered trademarks for Chrono Brake and Chrono Break, but a follow-up has yet to materialize.

Chrono Cross finally became available on the PlayStation Network as a PSone Classic title for those who missed the game the first time around.

An HD remaster for Nintendo Switch, PlayStation 4, Steam, and Xbox One was released on April 7, 2022, including the previously Japan-only Radical Dreamers.