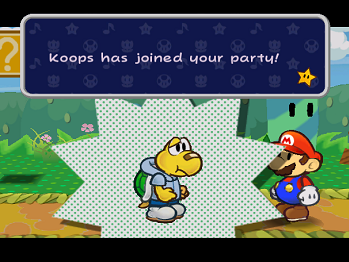 Kirby: Ooh, since Link isn't here, can I give Meta Knight an intro?
Meta Knight: A what-?
Kirby: Meta Knight has joined the team! He can carry people to higher areas, also occasionally teaming up with Tails to do so. When Team Luigi takes control, his cape transforms into wings that allow him to fly. His battle ability is being able to don brief invincibility for a short time.
Knuckles: I like mine better.
Princess Peach: Do I even need to mention that I still didn't get one?
— Super Paper Mario X, Chapter 47
Advertisement:

RPGs tend to make a big deal about who is and who isn't part of the player's travelling band of heroes racing to save the world from those evil machinations of the Big Bad. Expect to see some fanfare (such as a possible music riff) whenever a Chekhov's Gunman sheds their "NPC" label and submits to the player's team management; typically with a message announcing how "X joined the party".

Common enough that only examples that are played with should be listed.