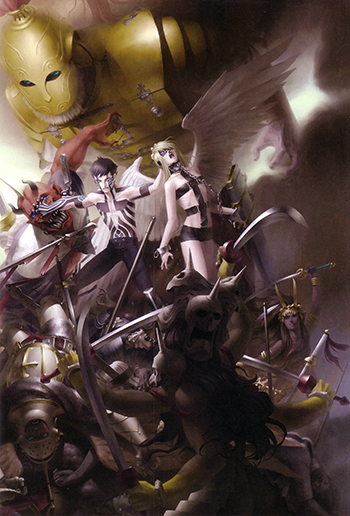 "Death's vastness holds no peace. I come at the end of the long road. Neither human, nor devil...
all bends to my will."
Call it what you will—A revelation from God, or a curse of the demon king. The fact remains that our world came to an end. A heretic called upon an unearthly light, and devastation ensued. Chaos crawled out of the depths of the ocean, from the black abyss. Death upon death... nothing but death in this barren land. Who can we pray to? There are only demons and fiends here... A voice in the dark beguiles me. "Truth is a mystery, unraveled by the candles' flames".
— From the Journal of a Man who Wandered into Another World
Advertisement:

Tokyo, 20XX. You and two of your high school classmates have gone to visit your sick teacher in hospital, only to find that the building is eerily deserted. The search for your teacher leads you down into the basement of the hospital, where you find evidence of sinister occult experimentation and a mysterious man who is none too happy about your intrusion. Just as he's about to have you killed, you are rescued by the intervention of your teacher, who convinces the man to let you live and takes you to the roof.

There, you witness the Conception: the destruction of the old world and its transformation into an embryonic state- the Vortex World- to prepare for its eventual rebirth. Tokyo becomes a spherical world populated by demons and the wandering spirits of those who died during the Conception, with a glowing sphere suspended in its center. You have survived... but during the Conception you encountered a mysterious young boy who forcefully implanted you with a creature called a Magatama, transforming your body into that of a demon.

Waking up in the hospital with your new demonic body, your struggle for survival in this new, hostile world slowly becomes a battle to determine what form the new world will take. On one side is the Assembly of Nihilo, who wish to create a world of complete stillness and peace, devoid of emotion. Opposing them is the Mantra, a powerful gang who believe in ruling by strength, passion and fear.

As the legendary Demi-Fiend, you have the power to decide the fate of the Vortex World. Will you side with one of the emerging armies to help make their idea of a perfect world a reality? Or will you destroy them all and take the power of creation into your own two hands?

The game is largely a dungeon crawler, as you make your way across the ruins of Tokyo looking for answers and your missing friends. Gone are the cyberpunk elements of the previous Shin Megami Tensei games; as your character is a demon you have no need to use a computer to translate and summon. Your party is made up of the main character and the demons that you have recruited to your cause. By talking to demons, you can convince them to give you money, items or to join your party. Most will demand money and items as a bribe before they will listen to you, but some will also pose a philosophical question that you must answer to their satisfaction.

As demons level up extremely slowly, the quickest way to maintain a strong team is to fuse your demons together at the Cathedral of Shadows, creating entirely new demons with new powers and some inherited from their previous forms. A handful of demons will also evolve once they have reached a certain level. The Main Character develops by equipping different Magatama, each of which has a set of abilities that will be learned upon leveling up. An additional degree of difficulty is added by the fact that your character can only know eight skills at any one time, and must forget moves to learn new ones; once they are forgotten, they are gone for good.

Battles are conducted with the Press Turn system, where at the start of each round you receive a number of actions equal to the number of characters in your battle party. A normal action consumes one Press Icon, but inflicting a critical hit or attacking the enemy's weakness only consumes half a Press Icon. Thus, by attacking the enemy's weaknesses you maximize the number of turns you get in one round. Unfortunately, attacking an enemy with an element that it nullifies- or missing entirely- consumes two Press Icons, and if the enemy repels or absorbs the attack you lose all your Press Icons. This also applies in reverse; the enemy can attack your weak points to win additional actions for itself and loses actions if you defend yourself correctly. This battle system would go on to be used in Digital Devil Saga and in a scaled-down form — the "One More" system — in Persona 3, Persona 4, and Persona 5.

A third Updated Re-release, titled Shin Megami Tensei III: Nocturne HD Remaster, released October 29, 2020 in Japan, and on May 25, 2021 worldwide, for Nintendo Switch, PlayStation 4 and Microsoft Windows via Steam. It is primarily based on the Chronicle Edition, with Raidou included as the Guest Fighter by default. However, the game also has a purchasable "Maniax Pack" DLC to replace Raidou with Dante instead. The Steam version also reworks Raidou as free DLC and adds an option to play the original release of the game without the additions from the Maniax version.

"Featuring Dante from the Devil May Cry series."
Feedback

Example of:
That One Boss