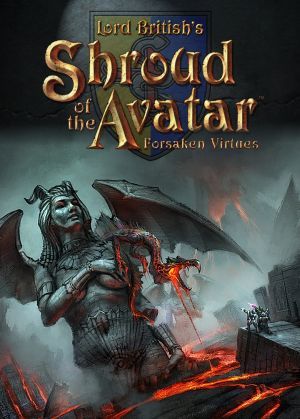 on Kickstarter, collecting over $1.9 million in pledges.
Advertisement:

The game is set in a Wide-Open Sandbox of the Constructed World of New Britannia, which is still recovering from the massive Cataclysm that destroyed the old civilization several generations ago. Furthermore, the population of the world is under constant threat from the monsters spawned by the Cataclysm, and the prophecies tell about the impending End of an Age, which many fear will be much like the Cataclysm itself. You, as the Avatar, return to New Britannia and are tasked with following the eponymous Virtues (Truth, Courage, and Love), facing the Hidden Villain, and ultimately restoring peace and harmony to the world.

While the game will be fully playable offline, the devs actively promote its "Selective Multi-Player" mode, which aims to be the middle-ground between small-scale Co-Op Multiplayer and a full-blown MMORPG. In short, it works by allowing you to select which other players (if any) you want to play with, so that no others can join your game. Offline characters will not be playable online and vice versa.

The Shroud of the Avatar series will tie in with

Underworld Ascendant series (and vice versa) in the same way the core Ultima series was connected with the Ultima Underworld games.

Alternative Title(s): Shroud Of The Avatar