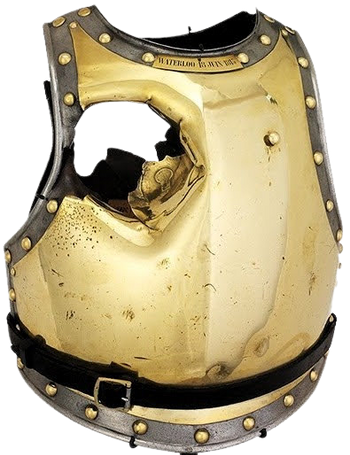 The cuirass worn by 19-year-old cuirassier Antoine Fraveau, struck by a cannonball during the Battle of Waterloo, 1815.
"I shoot the hippopotamus with bullets made of platinum,
Because if I use leaden ones, his hide is sure to flatten 'em."
— Hilaire Belloc
Advertisement:

So you've been managing well with your current skills, dispatching enemies with your familiar attacks and weapons. Now you've encountered a Heavily Armored Mook. Using your basic attacks and abilities you... fail to hurt the Mook at all. Not good.

So what do you need? You need an Armor-Piercing Attack! Basically, it's an attack, weapon, or munition that rips through the armor that your enemies wear (or their special shield, or whatever's protecting them), often as if they had no armor to begin with.

Obviously, this isn't quite how things work in real life.

It is true that some weapons tend to be more effective than others against a given type of material. Padded clothing for example, can protect against cuts and blows, but is easily pierced by a sharp point. Solid armour-piercing shot

is certainly better at punching through armoured warships and tanks than a simple high-explosive shell. However, fiction tends to treat armour-piercing properties as being able to defeat any protective measure with ease, while weapons that cannot pierce armour are considerably less effective, to the point of doing little more than Scratch Damage at best.

Firstly, it is possible for a weapon to cause considerable damage without managing to penetrate protection. A Bulletproof Vest may be able to stop a bullet, but the force of the bullet has to go somewhere, often cracking ribs. This is elementary physics at work: all the kinetic energy that went into propelling the bullet has to end up somewhere, after all. These physics were exploited by the warhammer in medieval times, particularly when plate armor was at its heyday: while swords and arrows couldn't penetrate through plate armor, warhammers could do the next best thing and injure the wearer straight through it. This also applies to tanks as well: if struck hard enough, armour plating can deform, which leads to portions of the inner facing breaking off and turning into dangerous shrapnel (called "spall").

Secondly, there is no such thing as a weapon capable of "ignoring" armour. Anything designed to breach armour, whether it is a solid projectile or a shaped charge warhead, will encounter some level of resistance. Moreover, the actual effectiveness of a weapon against armour is dependent on factors other than its design and construction. A solid armour-piercing shot from a tank cannon for instance, is strongly affected by environmental conditions (i.e., air resistance and gravitational pull) that will reduce its power over longer distances.

Since fighters would just use an armor-piercing attack or armor-piercing ammunition on everything unless there was a reason not to, there have to be some potential downsides. One can simply be expense and availability. Tungsten-cored armor-piercing ammunition for example, make use of a relatively rare material and require more advanced manufacturing techniques that add time and expense to production. Another possibility is that the attack does less damage in exchange for its higher penetration against armour. The issue came up in medieval archery, where a needle bodkin arrowhead had a higher chance of piercing mail armor, but couldn't create as large a wound as a broadhead would in an unarmored person.

See also Depleted Phlebotinum Shells and Clothing Damage (if the armor is destroyed). Compare Fixed Damage Attack, which always does the same amount of damage to everything. Tends to work well against enemies that employ Damage Reduction. Might cross over with Elemental Rock–Paper–Scissors if the armor is made from one element and the skill or weapon uses the opposed element. Not related to Armor-Piercing Slap or Barrier-Busting Blow. May be used in combination with Armor Is Useless and/or One-Hit Polykill.

Compare Anti-Armor, when a technique does more damage against heavy defenses instead of bypassing them, and Unblockable Attack for attacks that blow through Defend Command.

Typically Iron Jumps allow Mario to jump on spiked foes, but Scissors is a different story.

Typically Iron Jumps allow Mario to jump on spiked foes, but Scissors is a different story.