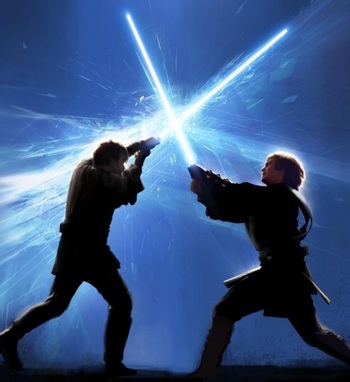 Nothing can block a weapon made of a magical material — except for another weapon of the same material.

Typically neither weapon will be affected at all; on rarer occasions, both will be destroyed utterly, or pass entirely through each other. The effect is the same in all cases- the phlebotinum weapons effectively cancel each other's usual superiority over opposing weapons, and only a direct hit on the opponent will end the duel... Which is also likely to kill them unless your Implausible Fencing Powers are good enough to disarm them without, y'know, "disarming" them.

Needless to say, a character who thinks they have a Disc-One Nuke in the form of their sword will be very unpleasantly surprised when facing an opponent who can even the odds. They may even get crushed if they've let their skills get rusty by relying on the weapon's power. Such duels tend to prove suitably epic.

A Sub-Trope of Mutual Disadvantage, of the "mutual invulnerability" variety. Also a subtrope of Elemental Rock–Paper–Scissors, where one of an element's defensive strong points happens to be itself. Contrast Takes One to Kill One, when only like can cut like.