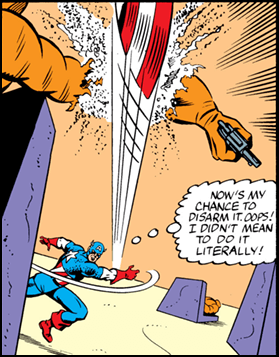 Don't bring your arms to a Captain America fight, dummy.
"Cho moi translates as ‘to cut off the weapon hand.’ Because this strike instantly ends an opponent’s ability to use a weapon but does not kill, choi moi is a preferred move in combat."
— Cin Drallig, Jedi vs. Sith: The Essential Guide to the Force
Advertisement:

Sometimes, in the middle of a fight, it becomes necessary to separate a combatant from their weapon. However, standard disarming techniques aren't working or just don't quite have the effect desired, and instead, the disarmee feels the need to remove a whole hand to make sure their opponent can't fight back. This has the added advantage of making sure the attacker doesn't need to worry about their enemy retrieving the weapon and continuing the fight... they no longer have any means of gripping the weapon in the first place.

This method of disarming tends to be used mostly by anti-heroes and villains, since hacking off someone's limbs is painful and very much permanent, barring a Healing Factor or some other extraordinary recovery method. All bets are off if the victim's weapons are their limbs... in such an instance, this may be the only practical way of removing said weapons.

Lighter works may decide to make sure that the arm lost wasn't flesh and blood to begin with, or invoke Good Thing You Can Heal afterwards to prevent the damage from being permanent. When played for laughs, a Pun about "disarming" is usually imminent. Note that this trope only applies when the removal of a limb is specifically to make the improvised amputee less threatening... in any other case, it's just An Arm and a Leg.

While dueling with Bundy, Edberg got disarmed before losing his arm and getting killed in the process.

While dueling with Bundy, Edberg got disarmed before losing his arm and getting killed in the process.