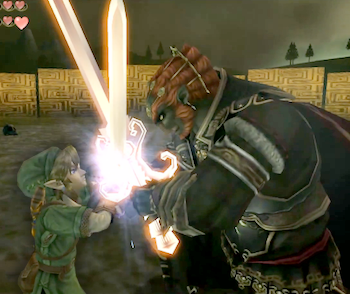 "You think you can overpower ME?!"
Advertisement:

At any given time during a Sword Fight, expect the two blades to lock together, with extra points for Sword Sparks.

This usually works best if the swords are crossed horizontally between the combatants, who stand close together and push against the clinch, each trying to knock the other off balance. It can also be done in a knife fight, with grabbing wrists or fists instead of locking blades. If a character is Dual Wielding, they will usually place one blade behind the other in an attempt to use both arms for leverage.

This is the ideal moment (since Talking Is a Free Action) to address the combatants' mutual issues with some confrontational dialogue, or to toss out taunts or threats. A Combat Pragmatist may instead let slip with a Groin Attack or Glasgow Kiss, since the other can't really defend against it. Or the two fighters may simply stand there, stare at each other menacingly, and bulge some biceps. If both combatants are super-strong, or sometimes even if they're not, the blades might grind against each other with sparks or even visibly glow.

Technically, this is called tsuba zeriai in kendo and anbinden or simply "bind" in the medieval German longsword tradition, where both parties try to gain a position for an attack by jockeying around so that the 'strong' (the half closer to the hilt) of one's blade is pressing against the opponent's 'weak' (the other half); the kinds of attacks that can be launched from this position vary from thrusts and snapping cuts around the opponent's blade to trapping (including the famous Groin Attack), grappling, and tripping/throwing movements. Also called "corps à corps" (body to body) in fencing/stage combat. But take notice that in Real Life, such blade locks are ideally brief moments before transitioning into the moves just mentioned, and not the ideal chances for extended conversations or pushing contests that fiction usually depicts.