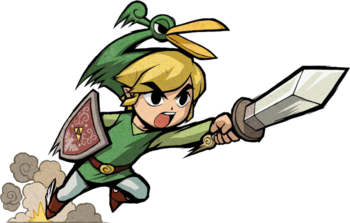 Some offensive moves require the user to stand in place, and then there's the other extreme of attacking while moving full tilt in a direction. Unlike Flash Step, this doesn't always require Super Speed, which is great for allowing a Mighty Glacier to gain a little bit of speed.

A Horn Attack is often preceded by the attacker charging toward the target.

A Sister Trope to Sprint Shoes, which may enable this.