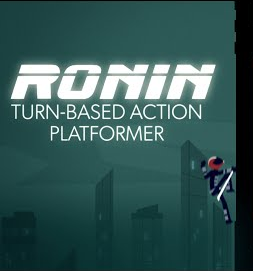 RONIN is a (sometimes) turn-based action game released in 2015 for PC, and ported to Playstation 4 the following year. It casts the player as an unnamed, always-helmeted swordsperson in a vaguely Cyberpunk setting. Their only goal: track down and kill the five people who murdered their father.
Advertisement:

The gameplay itself takes one of two forms. When the player hasn't yet been discovered by guards, they move in real time, and can attempt to evade or stealth-kill enemies freely. If they are seen, however, play switches to a turn-based mode where the action "freezes" until the player takes an action (enemies acting afterwards). Cue desperately maneuvering to cut down everyone in the room without getting hit yourself.