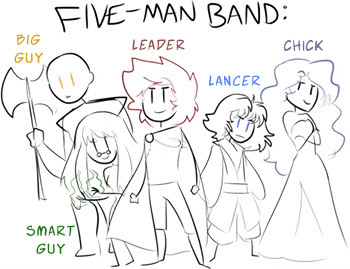 Pictured: Everybody in the band. And no one else.
Good things come in pairs, three is a magic number, Four Is Death, and for some reason we just like the number five. Maybe because there are five fingers to count on one hand. Or two legs, two arms and a head. Something about it makes it the perfect amount of intrigue but still simple enough to understand. Sounds like a good set up for a team.
Advertisement:

A group of five can get a ton of combinations out of the ensemble without it feeling bloated or unwieldy.note Mathematically, there are 26 ways to create pairs, trios, and groups with 5 characters. Not a small number by any means, but manageable. Compare this to a group of 4 (11 combinations) and a group of 6 (57 combinations). Longrunning Toku series like Science Ninja Team Gatchaman in 1972 and Super Sentai in 1975 (adapted into Power Rangers in 1993) were iconic for five member teams.

Many groups will have members fulfill defined archetypes. This makes their contribution to the team reliable and consistent. Even without perfect role lineups however, what makes the five man band work is the sheer variety of dynamics you can observe by mixing and matching different characters and subgroups. Like with Power Trios, the odd number of characters creates the constant need to find balance. Dynamics aren't rigid and can change depending on which collection of characters the story focuses on. Characters get depth from both their closest relationships, and how they interact with the relationships around them. Some common five man band set ups are:

In sum, while any collection of five people can make a group, it's the bonds between them and the way they are explored that elevates them to a band.

With the rare exception of having dividuals operating together in the same role, examples should be actual groups of five. The Sixth Ranger is meant to be a new member that shakes up the dynamics of an already existing and established five man band. If they have been there from the start or close to it, then it's a six person team and should be listed under The Team.