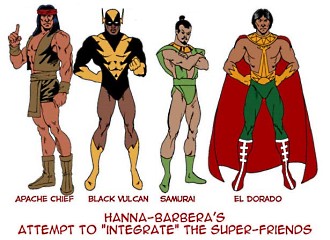 We here at Hanna-Barbera are very accepting of minorities.
Reducto: Isn't it true that the reason you left the Super Friends is because you were fired? Fired. Fire! Why?
Black Vulcan: They said it was some sort of budget thing, but I think it's because I complained that they were always pairing me up with a white Super Friend. Like I was gonna start super-lootin' the minute they weren't watching! And you think I named myself "Black Vulcan"? Hell, no! I used to go by "Supervolt". Black Vulcan was Aquaman's idea. And I said "Maybe we should just call you 'Whitefish'!"
— Harvey Birdman, Attorney at Law
Advertisement:

Essentially, a Captain Ethnic is a minority Super Hero of a different ethnicity or nationality whose powers and heroic identity are tied in an incredibly unsubtle, and often stereotypical, manner to their ethnicity or country of origin. They're usually created as a Token Minority to fend off criticism, though sometimes they're the product of creators who really want to say something about the issue at hand, and are handicapped only by the fact that they're entirely clueless about it.

Of course, many superheroes traditionally come with a theme that they're obsessed with — Batman naming all his stuff "bat-whatever" for no apparent reason, for example. It's when this is coupled with an ethnic stereotype that the character becomes a Captain Ethnic.

A Captain Ethnic doesn't need to be a stereotype in terms of how they act and speak, as some accurate national identities are actually unsubtle. It's just these characters frequently are stereotypes anyway — and thus, they wind up acting less like people from another country, and more like the Theme Park Version. Often, these characters are matched up with a Gratuitous Foreign Language.

This started largely around the middle of The Silver Age of Comic Books, following the American Civil Rights Movement, people started realizing that maybe, just maybe, having a universe where the only Super Heroes were white Americans wasn't such a good idea. The better writers, thus, added fleshed-out characters of other races and nationalities to their rosters. Of course, when the writers who weren't so good got into the act, things went a little differently.

Sometimes, a bunch are introduced at once, forming a super-powered Five-Token Band.

A related trope is when a black superhero's Code Name is "Black Something". Usually, their powers and identity are otherwise unrelated to being black, except for actual Africans.

Captain Ethnic can seem gauche nowadays - but you have to admit, he beats the hell out of the Ethnic Scrappy. Captain Ethnic can be a character portrayed in a plausible and interesting way — usually by doing the research on local culture and creating a character that's likeable and cool in their own right. This is sadly rare. When a Captain Ethnic with real depth and interest is created, he might end up with fans in the ethnic group that he comes from. Keep in mind that many members of the ethnic group involved loved the character when it first came out, even if it has aged badly.

Compare Captain Patriotic and Captain Geographic (when the name, patriotism, and/or costume are unsubtle).