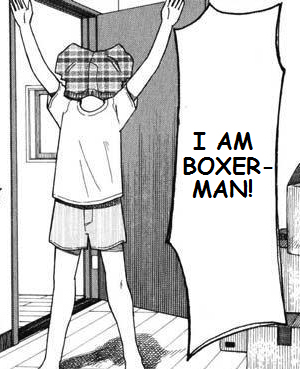 A quick-n-dirty way to make a superhero/supervillain name: call them "(Something)man". Alternatively, "(Something) Man" or "(Something)-Man". "Woman" or "girl" (or, very occasionally, "lass") can be substituted for "man", especially where a Distaff Counterpart of the "man" is needed; "boy", "lad" or "kid" can also replace "man". For variety, there are also a large number of "Captain (Something)"s, though those names are often sarcastic.

Common themes include using animals, weapons, items or elements. Expect a lot of Theme Naming if the heroes are in a team.

The Legion of Super-Heroes even justified this trope by noting how difficult it can be to give everyone in its ranks a unique codename. Summed it neatly as "Adjective-Gender".

In contrast is the Dark Age practice of giving heroes and villains gritty one-word names.

Compare Captain Superhero (perhaps the second most common superhero naming trope), Luke Nounverber (this trope's counterpart in Speculative Fiction), The Adjectival Superhero, Mister Descriptor, The Adjectival Man, Species Surname, TV Tropes Superhero Team (a Just For Fun page imagining any trope with a "something person" form was a superhero). Often, an Animal-Themed Superbeing might use this sort of naming scheme.