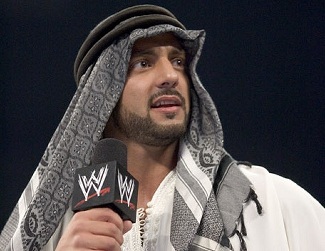 This is an image of Muhammad Hassa-ALLEYAHLEEYLALAYAHELLIYEAH
Advertisement:

Muhammad Hassan (real name Mark Copani; November 7, 1981) is an American professional wrestler best known for having had a brief but memorable run in WWE as an Arab-American heel who was angry about the prejudice he faced after 9/11. Before a controversial segment ended up killing his career, this guy was being pushed to the moon. On his very first appearance, he got to interrupt Mick Foley. He wasn't even on TV for a year, and he got wins over various wrestling legends (including Sgt. Slaughter and Jerry Lawler), a WWE title match, feuds with three of the greatest wrestlers of all time (Hulk Hogan, Shawn Michaels, and The Undertaker), and a win over then-WWE World Heavyweight Champion

Batista (it was by disqualification, but a win's a win).

Under his previous ring name of Mark Magnus, he was a 1x OVW Heavyweight Champion

In 2018, Copani has returned to wrestling as the Hassan character at Dynasty Wrestling's King Of Thrones

Tropes associated with Muhammad Hassan include: