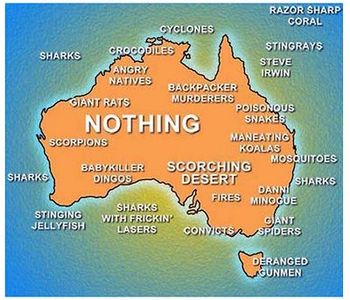 Got killed in a land down under...
By rats and sharks with frickin' lasers...note Steve Irwin was not quite so hostile, though, and the striped marsupial dogs with freakishly large mouths have been dead since three years before World War II.
"Australia is a psychotic, cold-blooded murderer that would swallow you whole if you so much as left the front door of your house."
— Badass of the Week, on Australia

In Real Life, Australia is a vibrant, diverse and multicultural country. The population is one of the most urbanised in the world (more so than in America or the UK). More than 80% of people live close to the coast,

while the interior is sparsely populated. In Hollywood, Australia is a primitive barren wasteland consisting entirely of Outback desert, rats, dingoes, crocodiles, kangaroos and some other marsupials, and occasionally a couple of rural people who run around wielding bowie knives and boomerangs. People talk with a grating accent, apparently a blend of Cockney English, New Zealander and vaguely British extraction called "Ostrayan" or more concisely "Strine".

In Real Life, Australian Wildlife is unique (the continent is one of the handful of megadiverse lands in the world), being dominated by marsupials rather than placental mammals. The dangers of the native animals have been noted by many - US President Barack Obama brought it up when he visited Australia

- but most of these creatures only live in remote areas. However, in Hollywood, Everything Trying to Kill You, although any sufficiently ''cute'' animal, no matter how wild, is inexplicably safe, including mice.note While the 'duck-billed' platypus and the kangaroo are animals that are often treated as cute in Hollywood, in truth they can be very dangerous: the male platypus has poisonous spurs that cause non-lethal but excruciating pain, the kangaroo can disembowel you with a single well-placed kick and even koalas have sharp teeth and claws that can cause nasty injuries if cornered. This habit of making Australia a Death World often results in Australians being considered ludicrously tough and utterly lacking tact.

For those fortunate enough to avoid being eaten by the aforementioned crocodiles, life is one long beach party and all meals consist of shrimp on the barbie (actually called "prawns") and Vegemite sandwiches (pronounced "veeeeejeemoit"). If these stereotypes are absent, the setting is likely Sydney, Australia's most populous metropolis and bustling economic centre. It's the home of the famous Sydney Opera House, which all hotels naturally look onto. Australia's capital is actually Canberra, a city built precisely halfway between Sydney and the other major capital, Melbourne, as a concession to neither city being named the actual capital.

The first Australian colonies began as settlements of convicts sent over by the British. A fair few Australians claim convict ancestry with pride, truthfully or otherwise. Of course, with one of the world's highest immigrant intakes, Australians are, ethnically speaking, slowly becoming a sort of Convict/European/Asian/Middle-Eastern/Oceanian/African/Americas amalgamation.

Complicating this trope is that a lot of Australian humour involves deliberately playing up or invoking the stereotypes to mess with foreigners. Especially Americans.

For these reasons, it should come as no surprise that villains love this country.

Surprisingly, one aspect of Australia that is rarely (possibly never) played up is how important the Aussie mining industry is both historically and economically. In fact, as they have the best military in their hemisphere, perhaps the Dwarf checklist should be consulted. Gruff, gold-loving, blunt-speaking, funny-accented, alcohol-swilling, Elf-hating, boastful of their battle prowess and mainly just the fact that they are Dwarves. In comparison, some have noted

New Zealand is largely interchangeable with Australia in western media. This is especially ironic given that New Zealand's indigenous ecology almost wholly lacks native mammals of any kind, except for a few bats and some marine mammals. Also, its location is even more remote, being one of the last major land masses colonized by humans: the Māori arrived only in the 13th century AD.note To give you an idea, the Vikings by this point had not only spotted America, they had managed to establish a settlement, lose a war, and then abandon it...over two hundred years earlier. Just gives you an idea of how HUGE the Pacific is... Although New Zealand is jokingly often known as "Down Underer," boasting a similar outdoor physical culture.