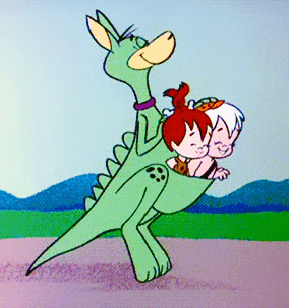 Uber's predecessor, Hoppy.
Bart: Ewww! It's not like in cartoons!
Homer: Yeah. There's a lot more mucus.
— The Simpsons
Advertisement:

Many works like to feature exotic animals, and nothing is a cooler way to introduce a weird beast than by using it for transportation. One unusual class of mammals with natural potential for transport are marsupials - after all, they come with their own pockets. And every so often, a character gets the bright idea of using that potential, and climbs into the pouch of a fast-moving pouched creature, typically a kangaroo. A few short hops later, character is safely at their destination, ready to resume the plot.

In cartoons, this trope very often overlaps with Pelican Package Pouch as the kangaroo can chauffeur several people around and practically store an entire wardrobe in their pouch, often carrying everything but that one item they need.

Given that a marsupial's pouch is something like an incubator for its embryonic infants much of the time, and is very rarely empty of young, this trope means Artistic License – Biology. Extra discredit if the marsupial is supposed to be male: the pouch is part of the female reproductive suite. In truth, trying to ride in a kangaroo's pouch would get a much... squickier result.

Even if the kangaroo is indeed female and not carrying young, unless the intended passenger is a small Talking Animal itself, there just wouldn't be room to hitch a lift. And, if they are small enough to fit, the rider won't be able to get out unless the kangaroo allows it: mother roos can constrict the pouch's entrance to restrain unruly joeys.

A Sub-Trope of Kangaroos Represent Australia. Compare Horse of a Different Color and Fur Is Clothing.