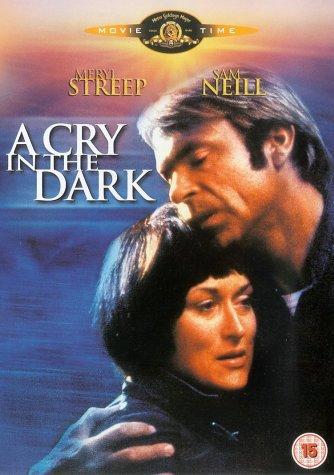 Evil Angels (released as A Cry in the Dark outside Australia and New Zealand) is a 1988 Australian film based on the 1985 book of the same name by John Bryson, in turn based on the true story of the disappearance and death of Azaria Chamberlain in August 1980. Her mother, Alice Lynne "Lindy" Chamberlain, maintained that she had been taken by a dingo who had been spotted in their campsite, but her story was widely disbelieved by the public and the media, leading to her conviction for murder in 1982. She was released in 1986 after corroborating evidence was found.

The film stars Meryl Streep and Sam Neill as Lindy and Michael Chamberlain, with a large supporting cast including Bruce Myles as Crown Prosecutor Ian Barker, Neil Fitzpatrick as the Chamberlains' QC John Phillips, Charles 'Bud' Tingwell as Justice James Muirhead, Nick Tate as Detective Graeme Charlwood, Frankie J Holden and John Howard as reporters Leslie Thompson and Lyle Morris, and an early appearance by David Hoflin as Aidan Chamberlain. It was written and directed by Fred Schepisi, co-written by Robert Caswell, and produced by Verity Lambert. The film earned Streep an Academy Award nomination for Best Actress, as well as the Best Actress award at the Cannes Film Festival.