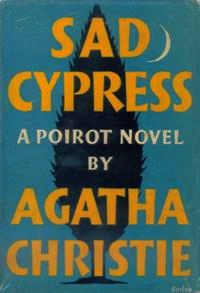 "Mrs Welman, whose money went to Elinor Carlisle, was murdered by morphine; Mary Gerrard, who stood between Elinor Carlisle and her fiance, was murdered by morphine. And nobody in the world had the slightest motive to commit these murders other than the accused; no one had the slightest opportunity other than the accused."
— Prosecuting attorney, Sad Cypress (TV adaptation)
Advertisement:

Sad Cypress is a 1940 murder mystery novel by Agatha Christie. Elinor Carlisle seems to be the only possible suspect for the murders of her wealthy aunt, Laura Welman, and her romantic rival, Mary Gerrard. However, doctor Peter Lord, who is in love with Elinor, asks Hercule Poirot to clear her name, insisting she can't be guilty, despite the overwhelming evidence to the contrary. Hercule Poirot points out that there's an extremely strong case against her, but still he agrees to investigate the case and find out the truth.

The novel opens with a prologue where we get to see part of Elinor's trial and follow some of her thoughts, and proceeds with a series of flashbacks which tell the story in three parts. It contains Courtroom Drama; it's one of the two times Christie used the lovely-woman-in-the-dock plot (the other being Five Little Pigs, to a much lesser extent.) Interestingly, instead of having a Summation Gathering, the solution is presented at court at the end of the book. The novel has been criticized for its abrupt ending and lack of plausible suspects, but it has received positive reviews as a suspenseful and well-written detective story.

by London Weekend Television as part of the ninth season of Poirot starring David Suchet as Poirot and Elizabeth Dermot-Walsh as Elinor Carlisle. Tropes for the TV adaptation can be found on the page for the series.