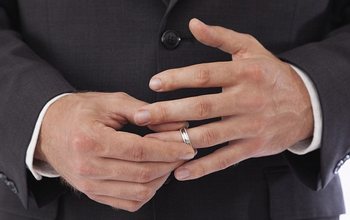 Lorelai: It's not over until he's out of the house with the ring off.
Rory: He took the ring off!
Lorelai: [horrified] Oh my god.
— Gilmore Girls
Advertisement:

A character is about to do something of serious import (Shoot the Dog, fall Off the Wagon etc.). Just before they do so, they take off their wedding ring.

Maybe they don't want to give away the fact that they're married (particularly to a person they intend to commit infidelity with), which would make this the opposite of the Wedding Ring Defense. Or the wedding ring is an unwelcome reminder of their ties to their spouse. Perhaps their spouse is their Morality Chain, and they need to unbind themselves from them in order to carry out some morally questionable act. Or perhaps the character is a widow(er), and their taking off their wedding ring is a sign that they've moved on from their dead spouse (or are at least trying to move on). Yet another variation is the character not wanting a villain to realize they are married and track down their loved one. Sometimes the activity about to be carried out is just messy, and they don't want to get their ring dirty...but the act of removing the ring draws stares or commentary from other characters, or someone sees the now naked ring finger and assumes the character who took his/her ring off is back in the dating pool.

Note that the character need not necessarily still be married for this trope to be used: they could be a widow(er), or even separated or divorced. On rare occasion, it can be a symbol of mourning, if the widowing had just happened. Sometimes the character is only engaged, and removes their engagement ring.

Closely related to Lost Wedding Ring. Compatriots Insignia Rip-Off Ritual, when someone removes a (usually police or military) rank insignia to symbolize their resignation or that they are about to act against the organization's principles. Compare and contrast the Wedding Ring Defense, where a character wears a wedding or engagement ring to fool others into thinking they're unavailable... and can take the ring off anytime. Meanwhile, Returning the Wedding Ring signifies the end of a relationship.

In Real Life, this act rarely carries the gravity that it does in fiction, and there are plenty of legitimate reasons for removing one's wedding ring, such as when washing dishes, carrying out electrical repairs or operating dangerous machinery. If there is some trivial reason such as these for a character to remove their ring, it's not an example of this trope.